While phase three of OTAs is in full swing, a couple of New York Jets will be taking a trip to the Tight End University (TEU) summit next month. At TEU, tight ends from across the league will come together to hone their craft, share expertise, and hopefully elevate the play of one of the most demanding positions in the NFL.

The two Jets attending this year’s summit are the newly signed tight end Tyler Conklin and quarterback Zach Wilson. Conklin, who was brought in as a strong all-around player, will get to share insight with the best of the best. He is expected to be a big factor in the 2022 Jets offense, especially with his abilities in the passing game.

Kittle confirmed that Zach Wilson was “99 percent” certain to attend in a segment on the Pat McAfee Show, which was later confirmed by Wilson after deciding to cut his Cabo trip short to make it to TEU. 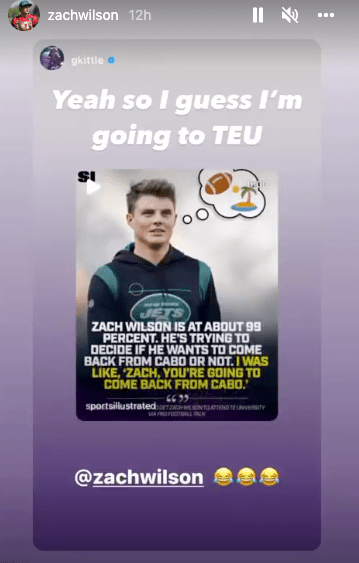 Wilson will get the chance to not only take extra practice reps but to get comfortable working with the tight end position. The Jets’ tight end room was about as bad as it gets in 2021, so learning to use and trust his upgraded arsenal of tight ends will only make his life easier on Sundays.

This will be the second annual TEU summit. Organized by prestigious tight ends George Kittle, Travis Kelce, and Greg Olsen, the event will run from June 22-24 at Vanderbilt University in Nashville, TN.

Next Article: Film breakdown: Everything to know about Sauce Gardner's strengths and weaknesses