Jets fans, you have a legitimate gripe.

The Ian Eagles and Kevin Harlans of the world do, in fact, speak more negatively about the Jets than any other team.

While every sports fan has been howling for years about Joe Buck and Troy Aikman having a bias against their team (Buck in multiple sports), Gang Green fans can say it truthfully, knowing the data backs them up.

An article by Betting.com titled “Bias in the booth – who are the most criticized of NFL franchises?” presents the results of an analysis of over 250,000 plays across 50 years of NFL broadcast transcripts. The Jets came in as the No. 1 most negatively discussed team in the league.

The article cites the recent controversy surrounding Zach Wilson’s postgame comments after the Jets’ Week 11 loss as a reason that the negative talk won’t go away anytime soon. However, this analysis represented data from across 50 years; it’s likely not specifically sensitive to recent events. This means that year in and year out, the Jets are criticized more often than other teams.

Meanwhile, another much-maligned franchise came out in the top five most positively discussed teams: the Cleveland Browns. This tells you that it’s not just about the quality of play, because Cleveland has won fewer games at a lower rate than the Jets over the past 50 years. Since 1972, the Browns have a .409 win percentage, the third-worst among all teams, while the Jets’ is .433, the seventh-worst. 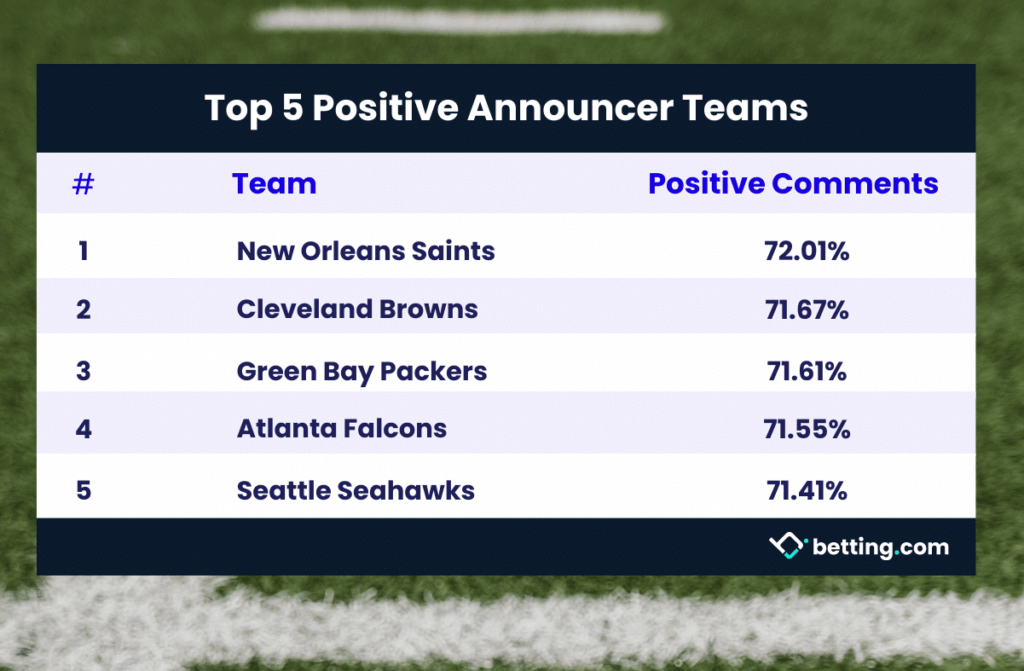 It remains unclear exactly what criteria were used for positive and negative comments. Presumably, this was done with some sort of word analysis tool rather than people listening to each and every broadcast. Therefore, the methodology would be interesting to note.

Still, the fact that the Jets are No. 1 definitely jibes with everything Jets fans have known about the team’s presentation in the national media. It follows that the national broadcasts would be biased against them, as well.

Maybe some Jets fans want to mute the audio on TV broadcasts and listen to Bob Wischusen and Marty Lyons on ESPN 98.7 FM, at least for those who are in the New York/New Jersey area. Though the syncing is not the easiest in the world, it will likely make for a more enjoyable total experience on Sundays.

Take, for example, Wischusen’s call of the Jets’ miracle comeback against Cleveland (ironically, given this article) earlier this year. Compare that to Spero Dedes’s TV call. Which one would you rather listen to?

So, Jets fans, there’s a reason to keep that chip on your shoulder. The NFL landscape really does disrespect the Green and White. Let’s see if the team can silence those naysayers on the field.

I for one put the game on mute. It’s more enjoyable that way for me. I never watch halftimes either. Even in the Superbowl. The last halftime performance That I can remember I watched was Tom Petty and the Superbowl when Bruce Springsteen Played.

I do that from time to time when I find the broadcast irritating.

Thanks for pointing out an analytical basis for my own anecdotal observations.

I remember a dialogue from the last Jets game in the 1980 season. Bob Costas was doing play by play. I don’t recall the color commentator, although I do recall him being quite negative about the Jets performance. When Costas said the Jets will have to continue their rebuilding in the offseason, the color commentator noted there were 3 teams which did not make the playoffs during then decade of the ’70s: the NY Jets, the NY Giants and the NO Saints and he added “no rebuilding program should have to last for a decade.”

I don’t want to validate the negative Jets TV coverage, but we must concede the Jets have deserved a lot of it. From whiffs or comebackers on high draft picks to QB futility to total zeros as head coaches to bonehead penalties, the Jets have been their own worst enemy. Even after the first three games this season I was already losing faith. Remember, in the Browns game if the Browns running back simply went to the ground after getting the first down the Browns could have run out the clock and the Jets would have started 0-3, but brain freeze caused him to try for a TD and it ended up costing them the game. All told, some questionable draft selections, hirings and lack of players development are largely responsible for the Jets’ negative TV coverage.

I do have hope the franchise has turned the corner, is speeding toward playoff relevancy and will be the subject of more positive TV media coverage. It might be fun to revisit this analysis in 5 years.

I agree, Most of it is due.

Notice that the Giants were not on that list of the top 5 most maligned teams, nor were the Browns or some of the other long-suffering franchises.

Wow, thanks for legitimizing my paranoia!

Seriously though, it would be good to know the metrics they used. I find the disrespect to be more subtle and insidious. The example of Moose Johnson saying we don’t have any “elite” defensive players is a case in point. I don’t know how that statement could be analyzed using keywords by some program and categorized as negative?
Also, the challenge by Saleh on gaining the first down, and the review of the White TD in the Vikes game were both immediately dismissed by Charles Davis (“I don’t know who’s giving Saleh info from upstairs, but they missed this one”).

Since I’m ranting….the spotting of the ball after a play MUST be fixed. It is unbelievable that w/ today’s technology we are still reliant on a set of eyes 15-20 yds from the play, and two poles w/ a chain to determine just where forward progress ended. This affects a game immeasurable w/o ever being noticed. More paranoia, the linesman in the Vikes game, to the left of our offense, screwed us a half-yd or more on multiple plays, including the White TD. For a team that struggles w/ 3rd and short this matters.
Lasers, chips, more cameras…something please!

Last edited 1 month ago by mlesko73
0

I would imagine that it was some sort of natural language processing (NLP) model, similar to a model that parses resumes or other written content but likely more sensitive to word patterns. I can’t vouch for the accuracy, but I have to say that those listed make sense to me.

Moose Johnston’s comment was so categorically ridiculous that his broadcast partner tried unsuccessfully to correct him. It’s true that a model might not pick up on that, but again, you’d have to know the method used to verify or contradict the results.

I agree about the Charles Davis comment, too. I’ve noticed that he’s particularly negative about the Jets, probably more so than any other broadcaster that has called Jets games this year. Honestly, on the live broadcast, I felt that the official gave an overly generous spot, and I understood why Saleh challenged even though I didn’t think he could possibly win. Even from replay, I did not agree with Gene Steratore’s assessment based on the angle of the ball in the arm. This has happened against the Jets an awful lot. In watching NFL games across the league, I’ve noticed that referees often spot the ball almost a yard shorter of where I thought it should have been placed, so I naturally adjust my mental picture of the first down marker to account for that. I was perturbed that the opposite happened in that case–the official spotted the ball a good 3/4 of a yard further downfield than it appeared on screen.

I don’t like to blame officials for losses, and the Jets have their own red zone and defensive third down failures to blame. However, the officiating was heavily one-sided in the Vikings game, and some of the calls were so tremendous that they swung the outcome of the game (particularly missed pass interference calls on the first White pick, a deep ball to Mims where the defender literally bowled into him before the ball got there, and a nice anticipatory throw from White to Garrett Wilson that appeared inaccurate because Wilson was grabbed while making his break with the ball already in the air).

Now that I’ve stopped my own rant, I can agree about the spotting of the ball. It’s akin to balls and strikes in baseball. I understand wanting to retain the human element and not slow down the game, but you already have enough human element with the penalty calls. Here, you could significantly speed up the game by automating the spotting process.

I agree, Technology should play a more prominent role in spotting the ball. That Spotting for the Viking’s was bad.

CHARLES DAVIS IN THAT GAME WAS AMAZINGLY PRO-JETS, TO A POINT THAT I SHARED THAT WITH FRIENDS….He was right about the 1st down (that’s when he said it), he never blasted the White TD review and he was supportive verbally of the Jet’s play all game long.

I didn’t think Davis was pro-Jets in this game, but I’m referring to his body of work from the whole season. Many of his comments have been anti-Jets.

I still don’t think he was right about that spot, although he was right that it wasn’t going to be overturned.

I am sure bashing a NY team gets high rating. Lot’s of the country has an inferiority complex and loves attacking NY teams.

Then why aren’t the Giants in the top 5?

But yeah, I agree with that in general, not just in sports.

I agree on the Giants to an extent. they do get more favorable press when they are bad. We have been better than them the last 50 years but they have won super bowls while we have lost 4 AFC championship games. That is the difference. The Jets and Knicks have not won and are easy targets.

There is still a perception of the Giants as a model franchise because they’re one of the original teams and have a tradition. John Mara really owes a debt of gratitude to his father since despite the Giants’ two Super Bowl championships since Wellington’s passing, they have hardly been a model franchise recently. Just ask Joe Schoen about the mess he has to clean up from Dave Gettleman, which may rival what Joe Douglas has had to do following the Maccagnan disaster.

The Mets haven’t won much either and may also come up in the top 5 most maligned in baseball. If the Yankees are in there it’s only because they’re still considered the bullies of baseball due to their 27 championships.

The Giants have won 4 SBs in the last 40 years, so hard to complain from an organisational standpoint.

True, but they’ve also had many periods of futility, including most of the last decade. Additionally, it does not make sense that the Jets are spoken of so unfavorably while the Browns are viewed positively.